Introduction to Biological Weapons
Biological weapons (BWs) deliver toxins and microorganisms, such as viruses and bacteria, so as to deliberately inflict disease among people, animals, and agriculture. Biological attacks can result in destruction of crops, temporarily discomforting a small community, killing large numbers of people, or other outcomes.

The way that a biological weapon is used depends on several factors. These include: the agent itself; its preparation; its durability in the environment; and route of infection. Some agents can be disbursed as an aerosol, which can be inhaled or can infect a susceptible spot on the skin, like a cut or wound. Attackers can also contaminate food or water with some agents.

Letter dated 9-11-01. ‘You can not stop us. We have this Anthrax. You die now. Are you afraid? Death to America. Death to Israel. Allah is great.

Biological weapons have a long history of use. In 1346, the invading Tartar army catapulted the bodies of plague victims into the Crimean Peninsula city of Kaffa and infected its citizens. In 1763, British troops under General Jeffrey Amherst gave the Delaware Indians blankets used by people with smallpox, possibly infecting the susceptible native population. Japan contaminated food and released plague-infected ticks during their conflict with China during World War II. The 2001 anthrax letter attacks in the United States infected 22 people and killed five.

Several differences set BWs apart from other weapons of mass destruction like nuclear and chemical weapons. The release of an agent is not immediately detectable. There are systems that detect biological agents, but most have a delay between acquiring the agent and identifying it.

The effects of an attack also are not immediately detectable. People may become exposed to an agent soon after its release, but the infection requires time to cause illness (the incubation period). Thus, one of the first indicators of a BW attack could be disease outbreaks.

The effect of BWs, disease, can continue after its release. If a transmissible agent, such as the smallpox or Ebola virus, infects a person at the site of its release, that person could travel and spread the agent to others. This would result in secondary infections at areas far from initial release and unprepared for the disease.

The 1972 Biological and Toxin Weapons Convention restricts countries from developing, producing, stockpiling, or acquiring biological agents, weapons, and equipment outside of peaceful purposes. However, some signatory countries may be continuing weapons development, as the former Soviet Union did before its massive program was discontinued in 1992.

Although developing and using biological weapons once required support by nations, recent advances in biotechnology have made it easier to develop dangerous viruses, bacteria, and toxins with fewer resources. This has increased concerns that individuals and groups could resort to bioterrorism to attack a population.

Biological weapon production can be divided into several, general stages: 1) A biological agent must first be chosen and acquired. In the case of toxins, the production method must be acquired. 2) After growing and multiplying to sufficient quantities, various selection and modification procedures can alter certain traits and characteristics of the microorganism. 3) The agent is then prepared for delivery.

Choosing an agent requires matching the desired results of an attack with an agent’s characteristics. Those characteristics may include: how much of an agent can cause disease (pathogenicity); time between exposure and illness (incubation period); how debilitating the resulting disease is (virulence); its lethality; and how readily the disease spreads to others (transmissibility). Countermeasures to the disease such as treatment and vaccination are also considered.

A pathogen can be obtained from two major sources: its natural environment and a microbiology laboratory or bank. When acquired from environmental sources such as soil, water, or infected animals, enough of the microorganism would have to be obtained to allow purification and testing of its characteristics. The difficulty in acquiring agents stored in labs and banks, such as the American Type Culture Collection, depends on accessibility to the pathogens, security for the facility, or security measures for the bank’s ordering process. These agents are purified and of a known quality.

An alternative to acquiring agents is creating them. Toxins can be produced by adding the DNA coding for its production to bacteria. Also, advances in biotechnology have made it possible to synthesize certain viruses based on its genome, or an organism’s genetic instructions, and using basic materials such as DNA. Dr. Eckard Wimmer first demonstrated this by re-creating the poliovirus in 2001, which was followed by Dr. Craig Venter’s synthesis of the bacteriophage phiX174 in 2003 and the 2005 re-creation of the 1918 flu virus by Dr. Jeffrey Taubenberger and Dr. Terrence Tumpey.

Growing microorganisms requires providing optimal conditions. Living cells are required for the replication of viruses and some bacteria. Fungi, most bacteria, and other microorganisms can be grown in Petri dishes or fermentation vats. Although growing large amounts of an agent is possible, it can be limited by factors such as equipment, space, and safety concerns that arise from handling dangerous germs without appropriate safeguards. However, large amounts of an agent may not be necessary if the target population is small. 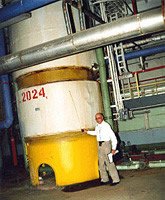 Modification of microorganisms through selection techniques and advances in genetic engineering could alter an agent so it will function in a particular manner. Agents modified for increased pathogenicity and a shorter incubation period could result in a more severe, fast-acting disease. Microorganisms that, under normal circumstances, do not infect potential targets could be modified to do so. Other changes could make treatments, vaccines, or the body’s immune system useless.

Delivering an agent requires preparing it to remain effective when outside of its optimal growing conditions. Exposure to environmental stresses such as temperature, ultraviolet radiation, and drying can reduce the agent’s activity. Some pathogens, like the anthrax bacteria, can encapsulate itself into a hardy, long-lasting spore not easily susceptible to those conditions.

Other agents require further processing that minimizes damage to it and allows it to retain its activity when dispersed. These procedures include: direct freeze drying (lyophilization); formulation into a special stabilizing solid, liquid, or gaseous solution; deep freezing; and powdering and milling. Once stabilized, the pathogens are ready for dispersal.

Many of the above manipulations require techniques and procedures that have been published in scientific literature. In addition, the equipment required for most procedures is available since legitimate researchers require them as well. This represents the “dual-use” problem, where the same knowledge and equipment used for beneficial work could also be used for more malevolent deeds.

The signatories to the Convention on the Prohibition of the Development, Production and Stockpiling of Bacteriological (Biological) and Toxin Weapons and on Their Destruction, the BWC, or the BTWC, agree not to develop, produce, stockpile, or acquire biological agents outside of peaceful purposes and weapons and equipment designed to use biological agents for hostile reasons. More information on the BWC can be found at the United Nations Biological and Toxin Weapons Convention Website.

On November 25, 1969, several years before the BTWC was negotiated and signed, the US stance on biological weapons was articulated in a unilateral statement made by President Nixon in which he said:

“I have decided that the United States of America will renounce the use of any form of deadly biological weapons that either kill or incapacitate.”

In this message, President Nixon states:

The National Security Archive, through Freedom of Information Act requests, has received several declassified Nixon administration documents that reflect the US government’s position on biological weapons at that time:

“any micro-organism, virus, infectious substance, or biological product that may be engineered as a result of biotechnology, or any naturally occurring or bioengineered component of any such microorganism, virus, infectious substance, or biological product, capable of causing death, disease, or other biological malfunction in a human, an animal, a plant, or another living organism; deterioration of food, water, equipment, supplies, or material of any kind…” (emphasis added)

Debate about the National Biodefense Analysis and Countermeasures Center
The National Biodefense Analysis and Countermeasures Center (NBACC) is a federally funded research and development center affiliated with the Department of Homeland Security (DHS). NBACC is managed by Battelle National Biodefense Institute (BNBI), a subsidiary of the R&D contractor Battelle Memorial Institute. According to a Department of Homeland Security factsheet, “The programs conducted at NBACC will provide knowledge of infectious properties of biological agents, effectiveness of countermeasures, decontamination procedures, and forensics analyses to support policy makers and responders’ development of policies, programs, and technologies.”

Some of the research programs outlined by DHS have generated controversy. Specifically, some have complained that its functions possibly violate tenets of the Biological and Toxin Weapons Convention (BWC). According to the treaty, signatory states are not “to develop, produce, stockpile, or otherwise acquire or retain microbial or biological agents, or toxins, that have no justification for prophylactic, protective, or other peaceful purposes.” However, part of the NBACC threat assessment includes acquiring, growing, modifying, storing, stabilizing, packaging, and dispersing BTA to determine various properties and capabilities, according to a February 2004 presentation by Army Lt. Colonel George W. Korch, Jr, Ph.D.

Biosafety Information – Centers for Disease Control and Prevention, Office of Health and Safety

Biosafety in Microbiological and Biomedical Laboratories, 5th Edition – U.S. Department of Health and Human Services, Centers for Disease Control and Prevention and the National Institutes of Health, December 2009

The 1, 2, 3’s of Biosafety Levels – Centers for Disease Control and Prevention, Office of Health and Safety